What Happened That Night?

I didn't mean for this to happen. In my opinion, nothing in life is ever planned. It's just a series of events interconnected to one another, some more unfortunate than others. You see, it all started like this.......

The night was sultry and foggy with a heaviness to the air. It was the beginning of August and everyone was sad to see that summer would soon end. The prohibition was in full swing but that didn't stop the booze from flowing if you were clever enough to know where to get it from. My friends and I wanted one last hurrah before returning to the hustle and bustle of the city. We had been vacationing in the seaside town of Innsmouth and although it was picturesque and quaint, we longed for the bright lights and lively parties that we were used to. Through the grapevine, we heard of a speakeasy in the center of town and although, it wasn't much, we thought that it'd be something fun and different to do so we got ourselves gussied up and set out looking for a rousing good time. 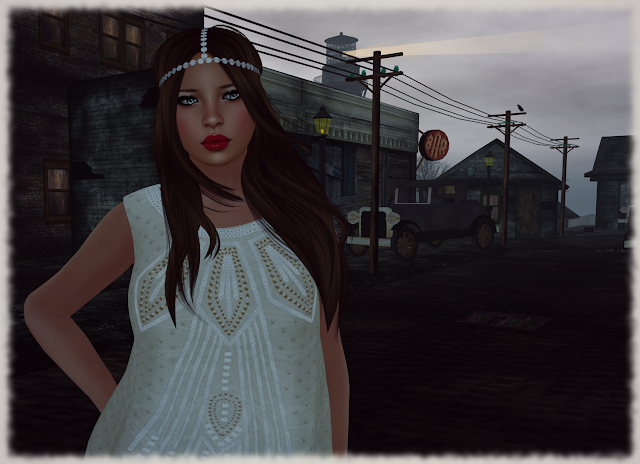 When we got to the store that housed the saloon in its soundproofed basement, we slipped the cashier a few bills and followed his nod towards the back and slipped down a flight of stairs. The smell of smoke permeated the room but the soulful blare of the trumpets from the band hired for the night drew us in. Glancing around the room, I saw a few familiar faces including that of my ex, Joe. When we had dated, I heard it through the grapevine that he had been bootlegging cheap gin to various clubs around the city so with the convincing of my closest friend, Lizzie, I dropped him quicker than you can say moonshine. Beings that I hadn't ever really given him an excuse as to why I was suddenly unavailable, I was a little apprehensive after noticing he was here but I soon forgot as I lost myself in the ragtime tunes and got down to dancing.

A slower song came on and I stopped to catch my breath before exiting the dance floor but then I felt a tap on my shoulder and a smooth yet familiar voice asking me to dance.  I turned around and got lost in the green of his eyes. It was Joe of course and in a moment of weakness, I accepted. As we danced the Charleston, I couldn't help but wonder what he had been up to in the last few months. I also couldn't help but notice how I fit perfectly in his arms. It was like I belonged there. Another song came on but I really can't recall what it was. I was lost in the moment and forgetting every reason I kept myself away from this man. We couldn't be separated the rest of the night and as the club started to wind down, he took my hand and led me to a quiet corner. He brought his hand up to my face and brushed my hair ever so gently out of my face before leaning closely and smiling charmingly at me. I thought he was leaning in for a kiss so imagine my disappointment when he asked me to do him a favor and drive some "special packages" into the city for him. I sat back stunned and hissed at him that he couldn't be serious but he said he was. Would you believe I was so insulted that I stood up and slapped him right across the face? I mean the nerve of him! He grabbed for my wrist as I tried to walk away but I managed to move a little quicker than him and I hurried up the stairs wobbling on my mules from a combination of the drinks I had imbibed and my haste to get as far away from him as I possibly could. "Kat!", he called as he ran after me, his footsteps echoing behind mine. I saw my Studebaker just yards away and hurried behind the wheel driving off in a frenzy. I went to turn the corner and next thing I know Ka-Pow! I must have majorly misjudged that turn because the last thing I remember is the flash of lights in my eyes right before the sound of my car colliding with another. 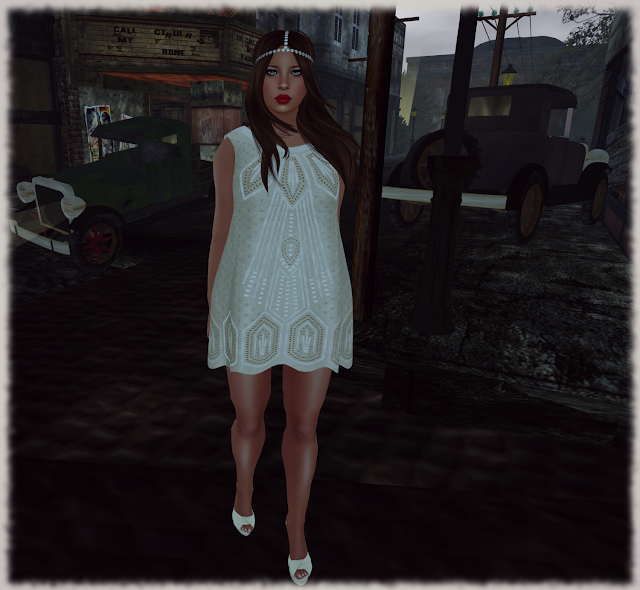 When I came to, I was shocked to see that things had changed. The store that housed the speakeasy was boarded up and abandoned as was everything else in town. Also, from the looks of the place, the town was deserted and looked like it had been for many years. Needless to say, I was very scared by now and also slightly confused. I didn't know what to do or where to go so I just started walking. Hopefully I'll find some answers. Maybe you have them....

To see what I'm wearing and for a closer look at my pretty skin, keep reading!